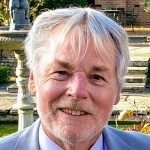 Bob has had a career in horticulture for over 50 years and over that time he has gained a vast amount of experience and knowledge. Now he is happy to share that knowledge through the CiB programme.

Bob started his horticultural career with The Royal Parks, London, followed by study at the Royal Botanic Gardens Kew. He then worked for various Local Authorities in and around London culminating as a Head of Service
position for the London Borough of Enfield.

For the last 15 working years he formed his own company providing strategic and management support to Parks Services and other government
agencies.

He judges for London in Bloom, the Green Flag Award and the Green Heritage Accreditation scheme he also judges for Flowers in the City, a City of London floral award.